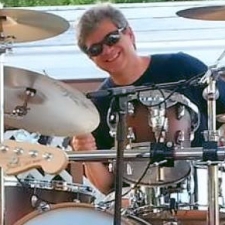 Wiley Lulfs creative style of drumming truly represents the Trop-Rock feel of his native South Florida. With a musical career spanning 4 decades, Wiley has performed with countless National Musical Acts and boasts to having drummed at almost every musical event, festival, and large stage venue in South Florida! Wiley’s musical relationship with Jimmy Stowe began in the late 80’s and their playing style together has a uniquely undeniable groove. A seasoned and talented musician, Wiley is also a consummate professional both on and off the stage.